Yesterday, December 9th, 2013, marked the 107th anniversary of Grace Hopper’s birth. For many years an inspirational figure amongst women in computing, it’s immensely satisfying to see “Amazing Grace” receive wider and well-deserved recognition in recent years for her pioneering work as a mathematician and computer scientist.

Coincidentally (or not?), yesterday also marked the launch of the most recent report on gender and science from the Institute of Physics: Closing Doors: Exploring Gender and Subject Choice in Schools. 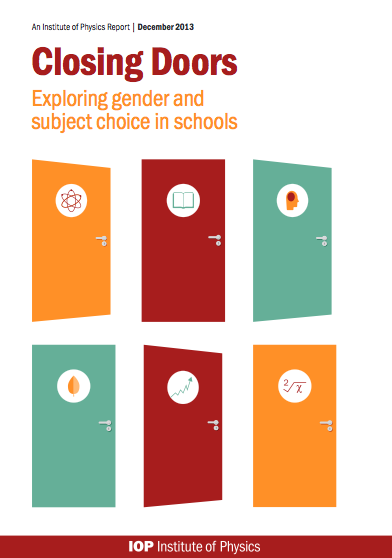 As an educator and researcher in both IT and education — with undergraduate and postgraduate engineering degrees and an MA in gender and technology — as well as a woman, a feminist, and the mother of a daughter studying engineering, this latest report interests me greatly. I’m encouraged by the efforts to understand and explain the persistence of gendered subject choice — and disappointed, though not surprised, at the familiar findings, i.e. that schools tend to educate in ways that conform to gender stereotypes.

Closing Doors is a follow-on report from last year’s It’s Different For Girls, which noted that for more than 25 years the percentage of A-level physics students who are girls has remained at around 20%. Both reports are part of a long record of Girls in Physics initiatives by the IoP, most notably the excellent 2006 report by Patricia Murpy and Elizabeth Whitelegg, Girls in the Physics Classroom: A Review of the Research on the Participation of Girls in Physics.

In Ireland, as in the UK and many other countries, we can trace at least thirty years of research on gender, subject choice, and the under-representation of women in STEM subjects such as Physics, Engineering, Technology and Computing.

In 1983, the Economic and Social Research Institute (ESRI) published a report on schooling, gender and subject choice in Irish schools: Schooling and Sex Roles: Sex Differences in Subject Provision and Student Choice in Irish Post-Primary Schools, authored by Damien Hannan, Richard Breen, Barbara Murray, Niamh Hardiman, Dorothy Watson and Kathleen O’Higgins. The report analysed sex differences in subject take-up rates in terms of the effects of provision (what subjects are provided); allocation (how subjects are timetabled and made available); and choice (pupils’ decisions). The researchers found that gender played a role at all three levels. However, taking into account differences in both subject provision and allocation (for example: over one-third of secondary schools in Ireland did not provide Physics to girls — most of these schools were all-girl secondary schools), girls were less likely to choose Physics than boys. The researchers concluded that pupils’ subject choices appeared to reflect the gender bias of wider society (including parents and teachers) regarding subjects such as Physics and higher maths, and careers in those areas.

In the 1990s, research in Ireland continued into gender and subject choice. In 1999, Marian Palmer cited a longitudinal study by Millar, Farrell and Kellaghan (1998) which showed that “Biology on transfer from Junior Certificate Science was more likely by girls than boys” and “girls are far less likely to take Physics as compared to Chemistry”.  Regarding the tendency for girls to take Biology rather than Physics, Palmer also noted an allocation issue that still can be found in some all-girls’ schools in Ireland today: “one girls’ school requires all students to take Biology and then Physics or Chemistry has to be a second science.”

My own research during the 1990s, first in Ireland (Cronin, 1995) and then in Scotland (Cronin and Roger, 1999), noted a lack of evidence for gender differences in ability, yet persistent gendered patterns of participation for STEM subjects (Mathematics, Physics, Engineering, Technology and Computing), and highlighted the potential conflict for young women between feminine gender role identity and the masculine image, discourse and culture of technology:

“As a number of theorists have pointed out, the ideal characteristics of masculinity in western society and the characteristics required for an engineer or scientist are essentially identical (Harding, 1986; Benston, 1986; Kramarae, 1988; Saraga & Griffiths, 1981). While the socialisation process for girls in our society emphasises feminine traits, e.g. emotion, nurturance, cooperation and sensitivity; the ‘technical worldview’, characterised by its emphasis on facts, control, rationality, and distance from emotional or personal considerations, is deeply interwoven with the definition of masculinity. Thus, while men experience validation of their gender identity in choosing engineering as a career, women may experience conflict.” (Cronin, 1995)

In 1999, John Hammond and Marion Palmer found that “higher level Mathematics, Chemistry, Physics and technology subjects are not generally part of the culture of either girls or indeed girls’ schools.” They summarised some of the strategies which had been put in place during the 1990s to address girls’ under-representation in these subjects:

“A recent review of strategies for attracting girls into science, engineering and technology suggests that successful strategies maintain and increase girls’ participation in these areas. Such strategies include enrichment activities through pre-school and out-of-school experiences, use of role models and single-sex environments for the teaching of some subjects e.g. physical sciences and information technology. Other strategies include reviewing teaching practice, classroom environments and considering the nature of school science and technology. International evidence suggests that such interventions need to be part of the ongoing process of education if girls’ participation rates in engineering related subjects and careers are to increase. We are reminded that ‘the world of science, engineering and technology is still, in the main, a masculine domain’ (Vlaeminke, et al, 1997, p. 26).”

So where are we today?

In the 2013 Leaving Certificate Examination in Ireland, 11.6% of the total student cohort took the Physics exam; only 25% of these students were female. Of additional concern was the fact that nearly a quarter of second level schools across Ireland still do not offer Physics at Leaving Certificate level. Thus, in 30 years (1983 to 2013) we’ve progressed from one-third of schools to one-quarter of schools not offering Physics. These were mostly all-girl secondary schools in 1983. Is this still the case today? Clearly, we need to understand the current situation. And we need to do better.

There are some bright spots, of course. NUI Galway’s School of Physics was recognised earlier this year for its commitment to gender equality. The Institute of Physics made NUI Galway the first university in Ireland to be a practitioner under the Institute’s Project Juno, which aims to redress the issue of the under-representation of women in physics in academia across Ireland and the UK.

What can we do? What should we do? Fortunately, there is a wealth of research from many countries, institutions, organisations, projects and researchers — along with suggested guidelines for how to enhance the motivation, achievement and retention of women in STEM subjects. There are links to some of these resources below.

To wrap up, I note that many recommendations focus on role models and mentoring for girls. I believe such initiatives are powerful and necessary, but by no means sufficient in effecting the level of change that is required. If we want to change the fact that only 15% (approximate) of those studying Physics, Engineering and Computing are women, we need to provide girls and young women with encouragement and support for considering these exciting but nontraditional careers — but we also must change STEM culture itself. We need not only the 15% (women in STEM) to inspire and encourage girls and to change STEM culture, we need men in STEM, the 85%, to work on this issue as well. Women and men studying and working in STEM must tackle this issue together.  It is long past time that we adopted more inclusive curricula and pedagogy in STEM classrooms and labs (from primary through postgraduate), and more inclusive cultures in all classroooms, study spaces and workplaces, as well as in our wider society.

“The most dangerous phrase in the language is, ‘We’ve always done it this way.’” – Grace Hopper

Resources from Technology is everywhere, but where are the girls? a webinar which I co-facilitated with Kim Wilkins for STEMx 2013.

Another great place to start is this series of four blog posts written by Theresa Liao: How is gender bias in science studied? Each post contains a wealth of resource material.

Murphy, P. & Whitelegg, E. (2006). Girls in the physics classroom: A review of the research on the participation of girls in Physics. London: Institute of Physics.

Saraga, E. & Griffiths, D. (1981). Biological inevitabilities or political choices? The future for girls in science. In A. Kelly (Ed.), The missing half: Girls and science education. Manchester: Manchester University Press.

5 thoughts on “What now? Women in Physics, Computing, Engineering, STEM”