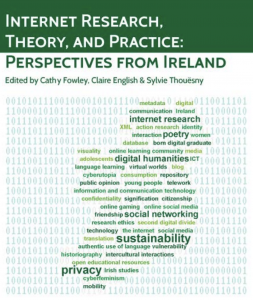 Newly published this week, Internet Research, Theory, and Practice: Perspectives from Ireland is a welcome addition to the literature in this growing field. The editors, Cathy Fowley, Claire English and Sylvie Thouësny, have assembled an impressive range of new work which will be of value to both researchers and practitioners. All work is peer-reviewed and available openly via Research-Publishing.net.

I thank the editors for inviting me to write a foreword for the new collection — shared below. Congratulations and thanks to the editors and all of the contributors for producing and openly sharing this excellent collection.

Created by humans, for humans, the Internet resides intimately with us – and before long, perhaps, within us. From 2000 to 2012 the number of Internet users rose from less than 0.4 billion to 2.4 billion (about one-third of the world’s population) [i]. This continues to rise; predicted estimates of the number of Internet users in 2020 range from 4 to 5 billion [ii]. The Internet is becoming increasingly wireless, mobile and geographically dispersed. We are moving closer also to an Internet of Things [iii] as opposed to simply computers, as objects from appliances to buildings to roads are equipped with digital sensors and communicative capabilities.

Many metaphors have been used to describe the Internet, its growth, and its role in our lives: the Internet as a network, an organism, a non-hierarchical space, the ultimate panopticon. Both utopian and dystopian views of the Internet abound in the popular press, on topics such as social networking among young people, the future of privacy, the future of reading, online education, teleworking and more.

Scholarly, evidence-based Internet research is of critical importance. The field of Internet research explores the Internet as a social, political and educational phenomenon, providing theoretical and practical contributions to our understanding, and informing practice, policy and further research.

This new collection, Internet Research, Perspectives from Ireland, is a unique and welcome work. The editors have compiled a diverse range of new scholarly, peer-reviewed research, spanning the fields of education, arts, the social sciences and technology. The authors provide academic perspectives, both theoretical and practical, on the Internet and citizenship, education, employment, gender, identity, friendship, language, poetry, literature and more. The collection comprises a rich resource for researchers and practitioners alike.

The locus and focus of the collection is Ireland – in this the collection is unique. All of the authors are based in Ireland. They are self-described Digital Humanities scholars, as well as researchers in literature, languages, psychology, philosophy, sociology, political science, information technology and media studies. They explore the global in a local context. Thus the collection provides a vital resource for researchers in Ireland, hoping to learn from and build on country-specific Internet research, as well as an important node in the global network of Internet research.

I applaud the researchers and editors for publishing this work, and more so for publishing it openly. Enabling open access to this research will only increase its value, now and for years to come.