I’ve been thinking about OER16: Open Culture since the conference ended just over four weeks ago. I’m reflecting now not just through the lens of those few weeks but also the other conferences and workshops which I attended immediately afterward, namely the C-DELTA project in Cape Town and the Networked Learning #NLC2016 doctoral consortium and conference in Lancaster. It has felt like a few months’ worth of sharing and discussing research and engaging in wonderful conversations condensed into a few short weeks – a great privilege. So, late as this may be, I want to share a few notes and impressions from these events, beginning with OER16.

As several others have already written, and beautifully (collection of blog posts below), OER16 was both enjoyable and thought provoking. I’ve long considered myself an open educator and I’m currently doing research in the area of open educational practices, so this is a community in which I feel at home. My main takeaway from the conference was that OER16, and the open education community more generally, is growing, changing and evolving. There was a strong strand of critical research shared and enthusiastically discussed during and after the conference.

My keynote: “If open is the answer what is the question?”

I was honoured to be asked to give one of the conference keynotes by the co-chairs, Lorna Campbell and Melissa Highton. I sometimes struggle with the idea of conference keynotes. I know that plenary speakers can be a powerful (and sometimes provocative) way of exploring conference themes. Yet I find myself wrestling with ways of providing that focus while also including other voices and perspectives, and including space for conversation and discussion. My approach for OER16 was to share my thoughts and questions in a blog post well before the event, inviting ideas, feedback and discussion. That post If ‘open’ is the answer, what is the question? led to several weeks of discussion before the conference; I shared this in the keynote. During the keynote I focused on 4 key ideas:

Here are links to a video recording and my presentation slides:

Thanks to Beck Pitt for her amazing visual notes… 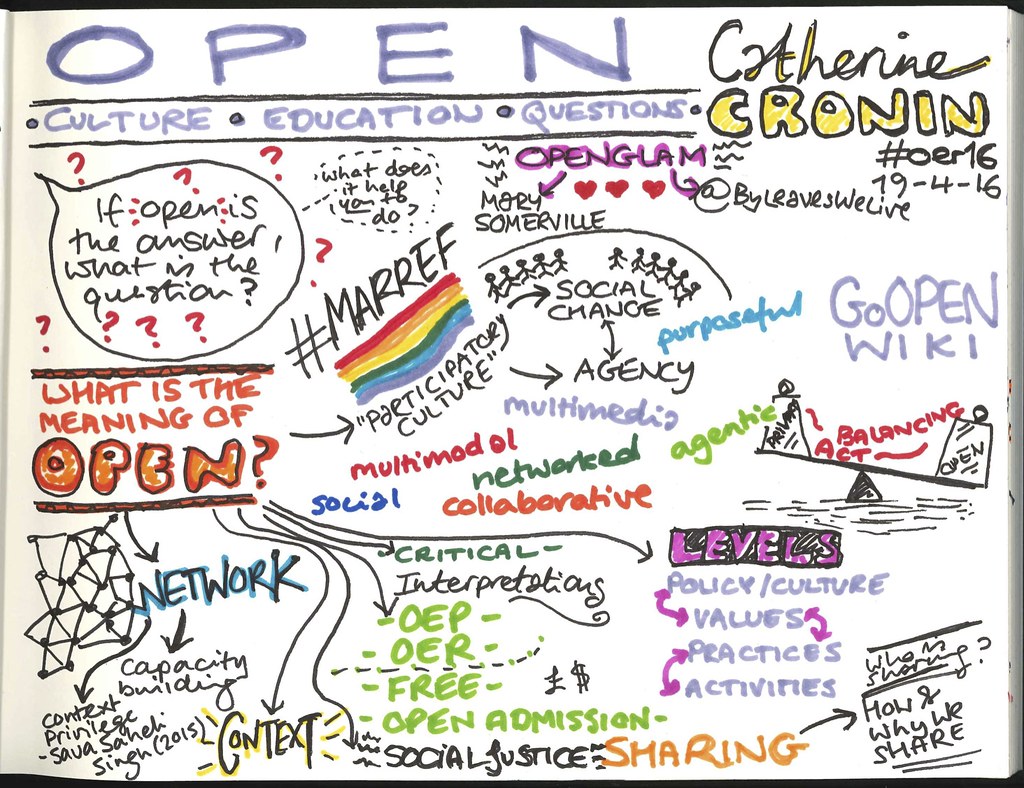 And thanks to Stuart Allan for his concise summary of the issues and challenges we face:

Having a clear, value-driven vision for openness based on ideas of sustainability, civic responsibility and social justice, as advocated by Catherine Cronin and others, represents the very best of what higher education can be (or should be). But when it comes to implementing this vision in a specific context, there are tensions at work between political values, educational aims and pragmatic concerns. These will have to be negotiated with courage and no little skill.

There were many, many dilemmas in choosing sessions to attend at OER16 – the programme was rich and varied. A few highlights for me were:

Finally, if you are at all interested in openness, OER and/or OEP, please do check out the blog summaries written by many (listed below) and videos of the excellent keynotes by Emma Smith, John Scally, Jim Groom and Melissa Highton:

(apologies to anyone whose posts I may have missed!)

Many thanks to Lorna Campbell and Melissa Highton, wonderful co-chairs of the conference and inspiring women in tech. Thanks also to the talented ALT team who supported us – before, during and after the event. Special thanks to Martin Hawksey and John Johnson, an incredible team; through their efforts the conference was made open via live audio and video streams, video recordings and audio interviews. And thanks to all who shared their work and participated in the conference; you made the two days very special…

Bibliography (from my keynote)